Combination of Thermal/Chemical and Disinfection Cleaning of Water Systems

In combination cleaning, disinfection and thermal cleaning are combined for more effective system cleansing. By adding pulses of air, the pipes are scrubbed so that the biofilm loosens. This allows dirt, such as sediment and organic material, to wash out of the pipes more effectively.

The most suitable method for the situation has to do with the persistence of the pollution and the materials in the (drinking) water installation. This becomes clearer during the admission, which is offered for a fixed amount. After admission, advice is received in conjunction with an executable plan of action. This is a detailed explanation of the method to be applied and a step-by-step plan according to the BRL-approved processes. 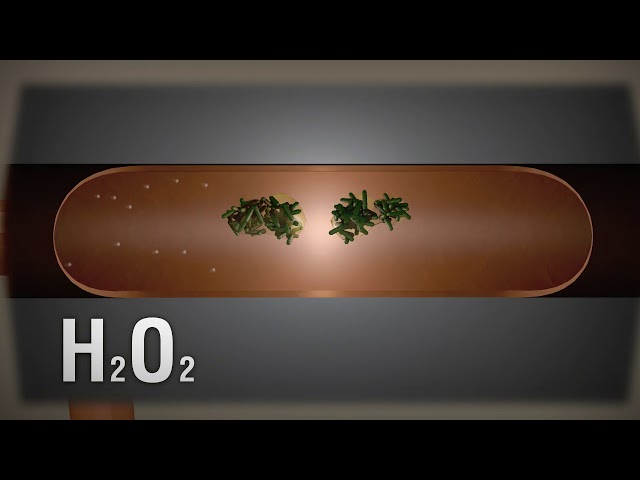 What are the benefits?

Biological deposits (biofilm) and mineral deposits are present on every wet surface, on every component and in every water system.

These deposits:
• they impede the ability of water operators to ensure compliance with government regulations on drinking water quality
• reduce the production capacity of water treatment plants<.br> • reduce the life of system components
• the costs and complexity of water treatment and distribution systems increase • interfere with the quality of the drinking water supply.
• mature biofilms and heavy slag come out of the material that ends up in the water. Bacterial counts affect the health, taste, odour and clarity of the water. Cooling towers are often an aerosol carrier for this bacterium and a major health hazard. Water quality is compromised if water storage and distribution systems are not thoroughly cleaned and maintained. Imagine putting clean water in a dirty glass.

Chlorine is Not a Solution

Common cleaning methods do not eliminate the biofilm and mineral scale. Cleaning with the Mösslein and Rentacs process guarantees complete sanitisation of the water tank and cooling towers, and the innovative probiotic dosage guarantees protection against pathogenic bacteria.

This the ability to detect and respond to cell population density by means of gene regulation. As an example, quorum sensing (QS) allows bacteria to limit the expression of specific genes to the high cell densities at which the resulting phenotypes will be most beneficial. Many bacterial species use quorum sensing to coordinate gene expression based on local population density.

Based on these molecules and chemicals, bacteria are able to coordinate behaviour such as: mass migration, wiretapping on neighbours, preforms of deadly attacks.

Each bacterium has its own specific language. It’s similar to carrying around a sign that says: “Hi, I’m here!”
Other bacteria perceive these unique chemicals and can determine what is happening around them, and how many allies or enemies are in the immediate area, starting to form defensive groups.

Probiotics can isolate pathogenic bacteria and inhibit their activity by taking advantage of the Quorum Sensing Effect.

Common cleaning methods do not eliminate the biofilm and mineral scale. Cleaning with the Mösslein process guarantees complete sanitisation of the water tank and cooling towers and the innovative probiotic dosage guarantees protection against pathogenic bacteria.

Around us there are microorganisms present in the form of viruses, bacteria and fungi. While there are some that are harmful, most are benign, beneficial, and even necessary for humans, animals, and the environment. Each environment has its own microflora which continually adapts to new circumstances. For example, suppose a wall or floor provides enough nutrition, moisture, and space for a microflora to keep 100 microorganisms alive. The microorganisms present make sure that this maximum is not exceeded. The floor or the wall are occupied by both: harmful and harmless, while some places remain unoccupied.

Since microorganisms have an average lifespan of a couple of days, there will be a continuous growth and death cycle in which the total community will remain approximately constant (Figure A) The current generation of cleaning products have been specially designed to clean and disinfect. When cleaning dirt (food for organisms) is removed and with disinfection the microorganisms are killed. (figure B) But the problem is that microorganisms are masters of survival and adapt at a surprising rate to changing circumstances. As a result, they are becoming more resistant to disinfectants and the biofilm becomes more persistent making traditional cleaning products less efficient at cleaning dirt from surfaces.

It can be seen that immediately after disinfection the number of microorganisms decreases significantly.

But due to the resistance, the few survivors who remain, will soon multiply until they reach the required number of 100 once again. Since particularly harmful bacteria are usually stronger, progressively more harmful microflora will result. (Figure C) When using probiotics there are very experienced forces deployed: the good bacteria. Since they themselves are microorganisms, they know exactly how to adapt: not by destroying the (harmful) community, but by occupying the empty spaces, the bad bacteria will be unable to take over and cause harm to humans, animals and nature. (Figure D) What happens next is revolutionary. As the community has reached the maximum occupancy of 100, microorganisms emit the signal to stop expanding. When you continue to use probiotics, pathogenic occupation will continually be forced into less activity. Eventually the original inhabitants will die of old age and their space will be occupied by good probiotic newbies.

Due to nature’s self-regulating effect, it is possible to achieve and sustain healthy microflora by using probiotics. So we can say that cleaning with the help of probiotics works in an ecological way and is safe for humans, animals and nature. (Figure E) Microorganisms live in what is called microflora. This is a community where they communicate with each other and organise themselves to survive as long as possible. To protect themselves, microorganisms build a biofilm – a shield that protects them from external influences. Unfortunately, this biofilm often has a negative effect on humans. Creates visible dirt, carries odours and is a hiding place for harmful germs and bacteria.

Hit enter to search or ESC to close